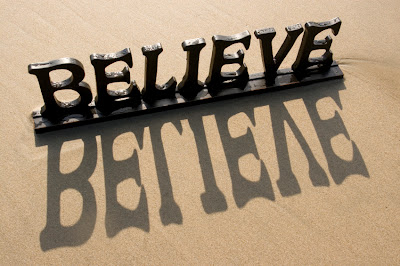 Some people say that in the middle of the word believe is the word lie, so you can't really believe in anything, because the word itself has lie in the middle.
But if you take away the E (which to me stands for what EVERYONE else thinks) then believe becomes to BE, Live
Which means to not just say you believe it, but to BE it, meaning it has to be a part of who you are.
And
LIVE it.
Don't just talk about what you "believe" in. And don't follow what everyone else thinks about your faith or belief (if it is right of course), but Be it an Live it. Let it drive you.
Just remember, you need to first get rid of the E (everyone else's opinions).