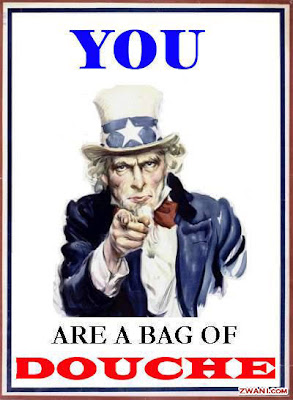 Take a look at the picture above...

That's pretty offensive to say to a person, isn't it?

Nobody really likes being insulted (even if the words are true). We all learn that there is a way that you should go about saying things to people. And even Jesus teaches us to speak with respect to others. I remember growing up and constantly hearing this expression, "there's a way to talk to a dog!" Basically when a person says that, they are saying that "you're not gonna talk to me just any kinda way." And by all means I agree that there is a right and wrong way to go about saying things.

So that may leave you asking, "then why did you write this blog?" I will get to that in a minute.

First of all let's be clear, I'm not saying that we should speak to people in an insulting manner. But what I am about to say is referring to the way that others speak to us.

I think in some way insults are good. WHAT! You may be thinking right now. But yes, I mean it. I think in some ways they are good. Why? Because when someone insults you, it makes you angry. And when you get angry, you want to do something about whatever they insulted you about. You want to make sure that that person never, ever has the chance to be able to insult you about that again. For example, you are a little overweight, so someone says to you, "wow, you are really packing on the pounds! What have you been doing, eating horses for dinner?" Sure. It will make you mad. But it will also make you look at yourself and think, "I will lose some weight so that no one will be able to say something like that to me again." And by you making that decision, you will become healthier. So the insult lead you to action. Of course there are many more constructive ways to say the same thing that they said to you, but there again, I'm not talking about the way we speak to others, but the way that others speak to us.

If we don't use the insult as fuel to push ourselves forward, then what is the other choice? We will end up sinking into a deep pit of depression or sadness, because someone put us down. And that is not productive. We have to use positive and negative criticism as fuel to propel us forward.

So the next time someone insults you, tell them thanks. And prove them wrong or change yourself so that they will never be able to throw that punch again.