How to be a CHAMPION... Lesson from LeBron #2 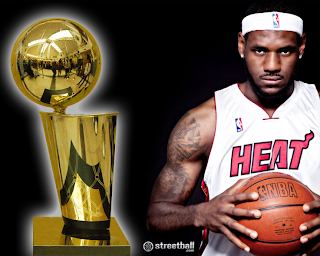 I wrote a message a week or so ago call "Get back in the Saddle". It was talking about getting back up after being knocked down.

Well, I think in this moment, with the NBA Finals victory still a bit fresh, this message is appropriate. The story of LeBron James in this years Finals victory is just that. A "get back in the saddle" type of performance.

Can you imagine leaving a team that you gave recognition (Cavaliers) that just so happen to be in your hometown and going to join two other stars, then promising success and being criticized every step of the way, but almost reaching that success, then at the end choking (meaning freezing up and not taking advantage of the moment) and being defeated in the most embarrassing way, by a team much older and supposedly far less talented than you? And having to endure  a summer full of ruthless, relentless verbal assault against you as a player and your character? Can you imagine the mental strain that puts on a person?

But how do you bounce back? You need to first off, humble yourself and recognize that some of the criticism is true, then decide to change those things and keep your mouth shut from then on and let your actions speak louder than your words. That is what LeBron did. I can not say if or if not he will win another title. But he got this one, how, by doing a gut check and deciding to bounce back.

The whole team actually had to do that. And you will have to do that in life. There will be times when the pressure seems to hard to bear, and you will need to bounce back. To check your heart and your will and resolve and go after that dream or goal. There is no failure that you can not learn from. No defeat that can not teach you. No loss that can not help you to learn how to gain.

Do this, and you too will become a CHAMPION.