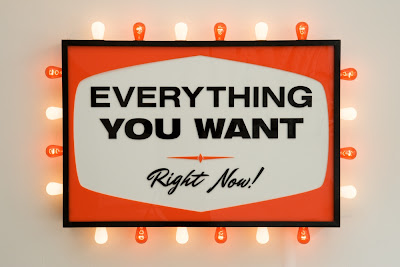 There are always movies and songs around this time of year with titles like "All I want for Christmas" or "All I Want in Life", etc.
But do people really know what they want?
One funny thing that I remember about Christmas as a child, is this. Almost every year, with almost every gift that I received, I pretty much wanted it more than life itself at the moment that I asked for it. But after about a day or so, it was like old news. People weren't excited to hear about it anymore, and it seemed somehow to lose the whole "Aww" factor. Sometimes I would literally toss it in the corner and just leave it for weeks or months after that, in search of the next great toy or game.
The point that I'm trying to make is simple. Many times people think they want something, when really they are just fascinated by the thought of having that something. Sometimes a person can think they want to be with someone, like the high school football jock, but in reality he is a jerk and they would hate being with him. Sometimes a person thinks they would love to work at a certain place, when in reality it would be their worst nightmare. Sometimes a person thinks they will die if they don't go to that concert, but once they get there, it wasn't even worth the hype, or the drunken car accident that followed later that night.
Also, sometimes a person thinks they don't want something, when really they do deep inside.
For example, a young man may hate when the parent tells him that he's wrong and that he's on punishment for the next month. But when he grows up and matures he is so appreciative for that, because now he knows what consequences are, and he ends up disciplining his children the same way.
So the point of all this is, you don't really know what you want until you take emotion and enthusiasm out of the equation and slow down and think. To really identify what you want, you need to use rational over feelings, your head over your heart. That will get you to the truth within yourself quicker than ever.